What are the first signs of prostatitis in men and how to treat them? 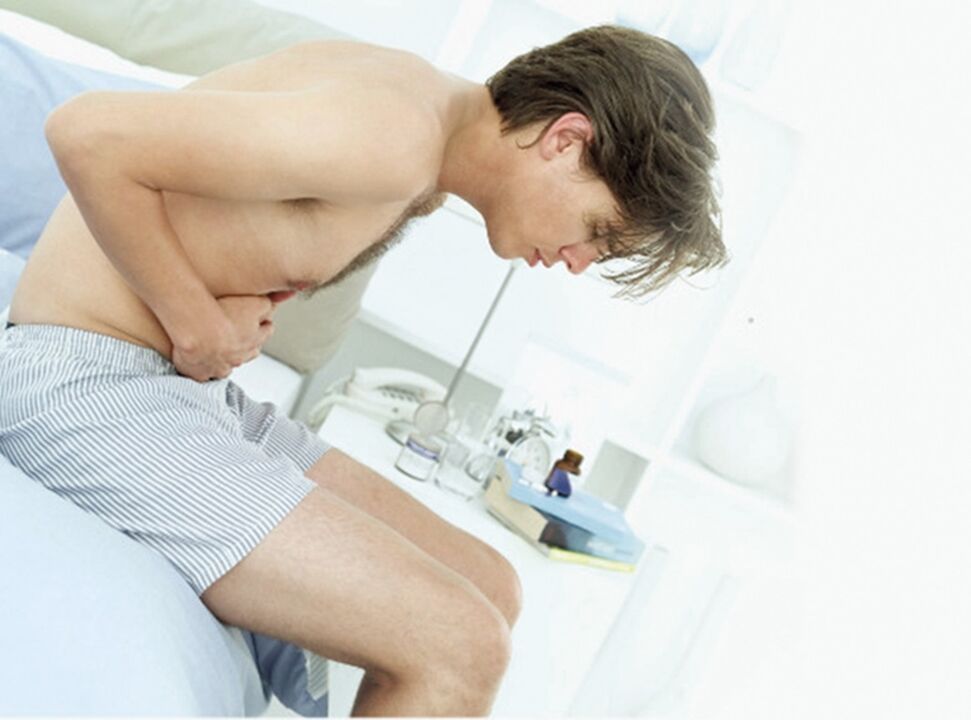 Prostatitis is one of the most unpleasant ailments in the male genital area. Due to improper nutrition, physical inactivity, bad habits and other negative factors present in the life of modern representatives of the stronger sex, the ubiquity of this pathology is constantly increasing.

It is quite easy to eliminate the symptoms of prostate disease, the main thing is to start treatment on time. That is why any man should know the first signs of prostatitis, as well as all the reasons why this disease can occur.

Prostatitis is a common infectious and inflammatory lesion of the prostate gland. But not all patients know that this pathology represents a great latent threat to the health of the male reproductive system. The prostate is a pelvic organ that joins and connects to the vas deferens and the urethral canal. Therefore, the presence of an infection in this gland can negatively affect the state of adjacent organs and systems.

Until recently, experts held that prostate diseases in men were only between 40 and 60 years old, but today this ailment has become much younger. Now doctors increasingly announce such a diagnosis to very young representatives of the stronger sex, whose age is 18-30 years. 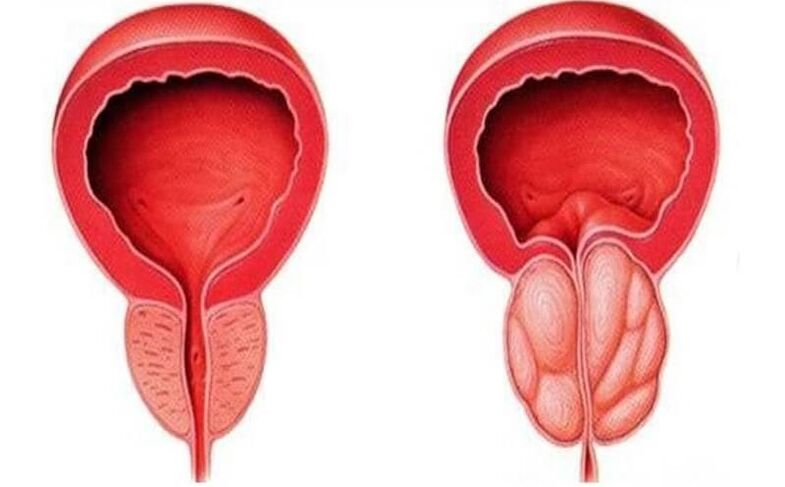 Why did prostatitis symptoms first start to appear at such a young age? The answer to this question lies in the too careless and neglected attitude of men towards their health. Research by scientists in this branch of medicine has shown that about 80% of male patients completely ignore the first signs of pathology. Most patients seek qualified help from a doctor only in advanced stages of the inflammatory process. And in such situations, it is already very difficult to completely avoid serious complications of the disease.

What is the reason for this problem?

A variety of factors can lead to the appearance of signs of prostatitis in men. Some of them create favorable conditions for harmful microorganisms of bacterial, viral or even fungal origin to enter the organ; others cause the gland to malfunction and cause stagnation of blood in it. The result of such a negative effect is the increased reproduction and growth of pathogenic microflora, as well as the progression of the disease.

Inflammation of the prostate in men develops under the influence of the following reasons:

How to determine the appearance of this disease?

The signs and symptoms of prostatitis can be subtle or obvious. This property of the disease is explained by the individuality of the organism of each patient: age, the presence of bad habits or chronic pathologies, the state of the immune defenses and other specific factors. The first signs of the disease appear most often 3 to 4 days or 1 to 2 weeks after the onset of the inflammatory process. The clinical manifestations of this disease include the following symptoms:

In the initial stage, the manifestations of prostatitis are often confused with symptomatic signs of pathologies of the urinary system or other infections. That is why representatives of the stronger sex in most cases indefinitely postpone a visit to a specialist. During this period, men treat the disease themselves, depending on the predominant symptoms; for this purpose, they take painkillers and antipyretic drugs.

To learn how to accurately determine the impending inflammation of the prostate gland, you need to know about several important manifestations of this ailment. The first symptom that appears in patients in relation to this pathology is frequent urination. In such a situation, a man almost constantly runs to the toilet, especially at night. The color of urine changes: it becomes too dark and saturated, or too light, translucent. The amount of urine that comes out is noticeably reduced. As a result of the progression of the disease, after some time the act of urination becomes painful, a burning sensation is felt along the entire urethral canal, persistent hyperemia and irritation of the genitals occurs.

The second specific symptom of prostatitis in men is a feeling of a full bladder. This symptom occurs due to the enlargement of the prostate gland, which compresses the ureter. This is why it is very difficult to fully retain urine during this time and it can spontaneously leak from time to time. At night, incontinence is often observed, while not only urine, but also mucous, purulent or bloody secretions can leak out of the urinary canal.

Sexual interruption is also associated with prostatitis, which occurs simultaneously with urination disorder. The inflamed prostate increases in volume, blocking the free flow of male hormones to the reproductive organs. As a result, patients notice a sharp decrease in libido, erectile dysfunction, and premature ejaculation. Failures on the sexual front negatively affect the psyche of the patient; Increasingly, nervousness, aggression, irritability or depression are manifested.

The disease of prostatitis also expresses itself in rapid fatigue and poor health. A formerly active man now appears tired or even sleepy. Adequate sleep in this case does not add strength, performance decreases, and the body's natural defenses decrease. In a similar state, the usual hypothermia or cold can lead to serious complications.

What is the peculiarity of acute and chronic inflammation?

The symptoms of this pathology can be very diverse. But every patient is obliged to know how prostatitis manifests itself in men. It is also extremely important to distinguish between specific signs of acute and chronic forms of the disease.

Acute inflammation of the prostate occurs infrequently in the stronger sex. The appearance of this form of prostatitis is evidenced by the following violations:

The symptoms of this pathology are also complemented by general manifestations in the form of increased weakness, decreased appetite, and apathy. The chronic course of the disease most often develops due to stagnation of blood in the small pelvis. In this case, patients develop the following clinical manifestations:

The release of secretion in the inflammation of the prostate accompanies both the process of urination and the act of defecation. With the bacterial form of prostatitis, the patient may experience a yellowish discharge of a slimy consistency. The appearance of the first symptoms of prostatitis requires immediate treatment, especially in the case of the development and progression of a chronic congestive form of the disease.

One of the main symptoms of prostatitis in men is pain, so we will talk about it in more detail. In this situation, the patient should try to describe his painful sensations: they can have a pulling, popping, cutting and pressure character. This is very important because, based on the description of this symptom, the doctor can judge the most likely cause of the appearance of prostatitis. No less information can be obtained from the pain localization site. In inflammatory diseases of the prostate gland, the pain syndrome is usually located in the following areas: 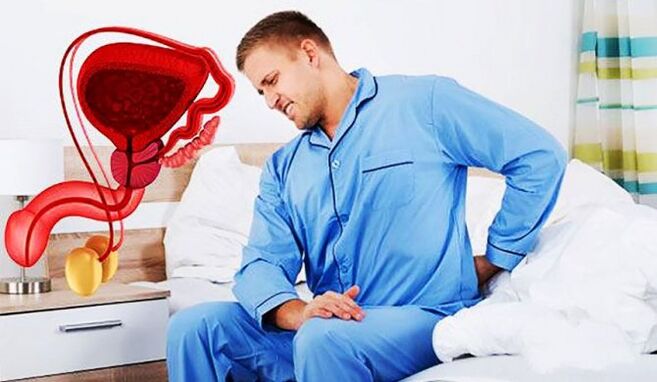 Every patient in the case of such a pathology experiences almost the same painful sensations every time. In some men, the pain is localized only in one place, while others find all the above symptoms at the same time. Pain syndrome often radiates to different parts of the body: legs, buttocks, abdomen.

Attention! The symptoms experienced by a patient with an inflammation of the prostate are very important to a specialist. After all, if a man correctly describes his feelings, a qualified doctor, even by the nature of painful manifestations, can determine the form of the disease. Therefore, the pains of the run over nature usually indicate a non-infectious type of the disease and the sensation of swelling and burning, on the prostatitis of infectious origin.

The pain syndrome is usually accompanied by the appearance of pathological discharge. One of the characteristic signs of prostatitis is the appearance of various secretions: translucent, milky-white, yellowish. They can be thick or elastic in consistency. This symptom manifests itself mainly after passing urine or feces.

Chronic inflammation of the gland can cause the development of spermatorrhea; In this case, a small amount of semen is released from the penis during bowel movements or in a state of tension in the muscles of the perineal region.

The presence of a greenish secret with an admixture of pus indicates a slow and slow course of the disease. Such secretions consist of dead leukocytes, damaged cells of epithelial tissue, mucus. Sometimes a similar phenomenon is observed with an exacerbation of a chronic form of pathology. In this case, the patient's temperature rises, painful sensations and chills appear. In such a situation, you should visit a urologist as soon as possible, since the progression of signs of prostatitis in men can lead to organ sclerosis and the development of infertility.

The doctor selects the treatment of the disease based on the diagnosis. Various forms of inflammation of the prostate require an individual approach to therapy. To eliminate the symptoms of acute prostatitis in men, it is necessary to take antibacterial drugs. It is better to use drugs that penetrate well into this organ of the reproductive system.

When choosing an effective therapy regimen, a qualified doctor should pay attention to the patient's immunity, take into account the nature of the disease, the individual characteristics of the man's body. Simple forms of inflammation of the prostate gland, with an acute course of the disease, can be treated at home. Patients with prostatitis are hospitalized only in severe cases, when they develop symptoms of severe poisoning. 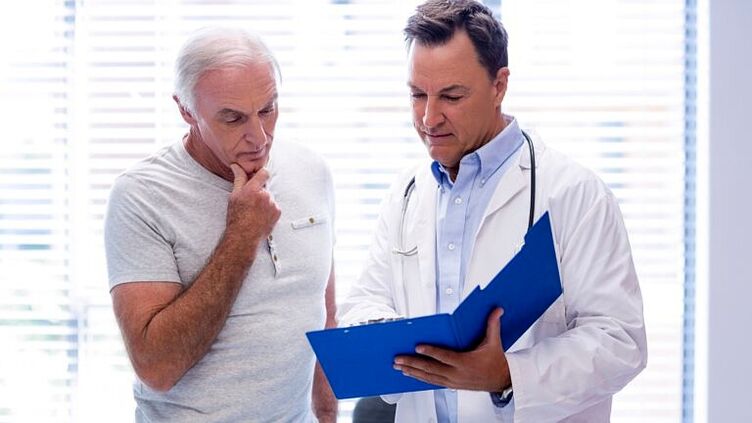 You can also treat this disease with the help of physiotherapeutic techniques: ultrasound, magnetic laser therapy. Hirudotherapy and manual manipulation (biopuncture, acupuncture) are considered popular methods. The use of medicinal herbs, the use of immunomodulatory and enzymatic preparations, cytomediators perfectly helps to get rid of any type of prostatitis.

In some situations, surgical treatment of prostatitis is performed in men. Surgical intervention is performed if the patient is diagnosed with an abscess of this organ. For this, the drainage of the prostate gland is carried out transrectally (through the rectum) or transurethral. For acute urinary retention, an epicistomy is performed - a hole is made in the bladder wall to remove a special suprapubic catheter.

Chronic inflammation of the prostate, which is not complicated, can also be treated on an outpatient basis. But the therapy of the disease in such a situation takes much longer. For treatment, suppositories, antibacterial agents, thermal methods, reflexology and gland massage are used. Patients who have suffered from prostatitis symptoms are advised to reconsider their lifestyle, give up bad habits, eat right, and avoid hypothermia.

Important! In no case do not self-medicate this pathology! Most often, inflammation begins to progress precisely as a result of symptomatic therapy and self-administration of drugs. Antibacterial drugs should be taken only under the supervision of a specialist; otherwise, it can significantly weaken the body's immune defenses, which will become another problem for you and only aggravate the current situation.

The first signs of prostatitis in men - the treatment of these manifestations should be timely. Such implicit symptoms pose a great danger, because they can arise not only as a result of inflammation of the prostate gland, but also in benign and malignant tumors of the organ. Therefore, it is very important to diagnose in time and start the treatment of the pathology as soon as possible. After all, the sooner the patient sees a doctor, the sooner the unpleasant and painful sensations will disappear, the sexual life will be normalized. 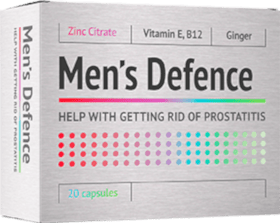